“Did  getting an interesting book from the library take this much time for you? ”

“How can  people get so affected  by other people’s thoughts?, perhaps it’s all only their imagination!”

“No one will second your idea to stay  back here alone with some  faded pages for company . Forbidden world for you is our fine kingdom of these narrow dirty lanes . Every where we    are reigning as ‘terror boys’. “

“Set route for  us   to get into the shopping centre.   Lights will be  switched off there after midnight. “

“No “ said Biko without lifting his head from the book that was in his lap.

Into his mind nothing else had entered . His  lips were speaking on their own.

Books  breathed joy into his soul. Rushing through the book  Kiesul   remarked  “oh! Pages sent to give me headache. My gods! Nothing better you can do?”.       Kiesul threw the “thing” on to the floor. 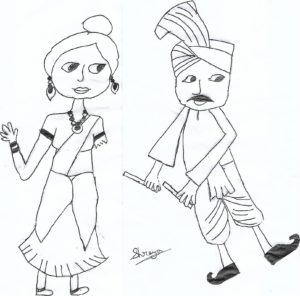 Nothing calmed Biko’s mind like books.  Getting second hand readable books from the vendor on the sidewalk  , read and return every Saturday for free.Biko called it the library. His mates didn’t bother to find out more. Biko read  books  all the free time he got.

Udit and Kiesul were ready for riding the dangerous track of destroying oneself.       Biko  read ,read until he fell asleep.

A loud knock on the tin door startled Biko. Suddenly he jumped to his feet.

From   outside emerged two policemen , one  sporting  the lathi in his left hand. soon Biko joined  Jina in the police station. The policemen were on the trail of Udit and Kiesul.

Time entered only very slowly, breaths seemed unable to travel into their lungs.

“You    urchin  you  are incredible. your photo is in today’s paper.  So you write  serious stuff during daytime and do serious crime at night.  “

The inspector  thought for a while before dialing on his mobile .

Jina  showed more regret  on  having  served as the one who  created trouble   for sensitive  innocent Biko than for his own wrong deeds.

“ Sir  Biko is not one among us, we are simply roommates just friends sharing a small dark damp room “

“Read to win”  had selected  Biko  as the overall champion in the national essay contest .I had the opportunity to give  him the medal.  Don’t you remember me? Am I  not correct?”

Asked the commissioner. Biko was  brought there by the inspector.

A car pulled up in front of the court for youngsters. “Sir are we late ? ”

No they have just finished the  procedures. We were at a vending machine. Biko now you are going with Mr. Das. Their trust will help you to build a  bright future.”

2 Replies to “Pages of truth”