Radio repeatedly kept broadcasting the  date of   the great event. The race!

The camel race of Dissayah.

Young and old are equally excited about the event. The race had always driven  their spirits to the peak. The  roads to Dissayah would    throng  with   people ,camels ,vehicles ,drummers  and more.

The whole desert was  filled with colourful tents pitched  close   to one another. Wherever the tents  did not rise the sand shimmered in golden. The dust flew in all directions carrying with it the scent of camel dung. Camel owners of different  nationalities had arrived well in advance for the event and has set up training facilities for their teams. The aroma of garlic  hinted cooking meat was in progress ,with music to keep the fire burning as the        winter crescent shone among  twinkling stars, while the international media now  shared desert tales of Dissayah.The camel race – the big festival of rich masters.

Safar taking the radio  in one hand and   a  baked flat bread in the other went and sat near Rayla.

The huge citadel    enclosed the residential space , gardens ,office  rooms,prayer halls ,  a small park and  rooms for helpers, vehicles in sheds , birds in cages and goldfish  in aquarium.

Safar   fed  Rayla the khubz , stroked   her chin and lay  beside her  with  his head  propped up against her hump.   “When are we going  to the   training camp? “ asked Rayla.

Ecstatic  with the thought  of great food  Rayla sprang up leaving Safar fallen  flat on the floor.

“Every thing depends on husoor’s orders.” said Safar. Rayla frowned in  disappointment   and began to kick hard on the ground  grunting loudly.

“Do you want Nijad to come with the whip?”

Rayla lay down ,her long neck slowly gulping  down her sadness resulting  from a dream that continued to remain a dream.

A couple of hours  later Nijad appeared  and croaked from a stone’s throw away.

“Safar ! you  rascal ! you had stolen the   maid’s  bread and given it to this ass  on long legs.! ”  He slapped Safar hard  on his face ,hurling  him down  right into the dusty ground. As Safar was wiping the  dust off his face  Nijad croaked again.

“Clean this place fast ! Reins and all racing gear on this wild beast. Engineer will be here  any moment. From the few steps he  had paced Nijad paused , turned and croaked very loudly “with husoor”!

As fast as  he could , Safar tidied the   surroundings and put reigns, decorations  and red  cloth   with blue motifs on Rayla.

“Why   am I getting ready? “ Rayla was  getting excited.

Safar tried to hold his giggle from  exploding into a loud laughter. “The husoor is getting you  married off  .“ he replied.

“Exemplary race camel must that Engineer be!”  Rayla began seeing her groom arrive  , just like a mirage .

So this is the reason why I was brought  to this palace from that  tiny pen in the desert.

From  a beaming state of excitement , weather turned harsh in Rayla’s dreamland when a man in   a fine European attire accompanied husoor and Nijad towards  her.  Soon a colourful umbrella rose with table and chairs beneath. Servants rushed in with snacks and drinks.

Nijad pulled an unwilling Rayla forward . She grunted and lay down. Whoosh! The whip came down fast.

“Mr.Ravi   Kumar, my camel had finished as the runner up last season. That stupid boy is worthless. More he is eight now.”

“Respect upon you  great master! my robot will help  you to make your lovely humpy princess become the  winner this time.

To assure your noble heart , let me tell you  more about my  robots . Horse and camel jockeys and elephant mahouts are my robots ! many!”

“Honorable sheik it is for the land from where I come. Very huge elephants line up  obediently under my robots ‘ commands.  The robots  parade  the  Indian tuskers for the temple festivals.”

The sheikh was impressed.

Mr.RaviKumar  received a fortune for selling him “Thuj” the robot camel jockey.

Desert from  town . Rayla was grunting  in numerous tones of disapproval. The tiring training schedule with froth filling the  mouth ,sun glaring  in the eyes , dust filling the lungs, Nijad croaking into ears with  a big trumpet.

“Nobody thinks of giving me even the   tiniest cactus leaf. Why should  the ship of the desert need food ? Only yuck tasting cubes to make me run fast” 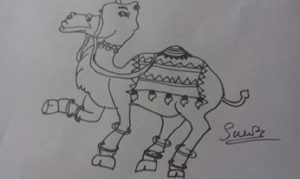 ” Ill motived Nijad now wants that toy to sit on me and beat me. We are the team – me and Safar. Only Safar will  sit on me ,and that makes me want to fly. Fly carefree to freedom eternal.”

“First the desert will finish that creature by burning his head , then me  and you will run away to a distant   oasis. And no one will trouble us  ever.”  Rayla  could not stop herself from kicking the ground.

“Hello friends can  I join your discussion?”

Rayala and Safar  turned in disbelief . Thuj was talking to  them . Was he  smiling  ?

” Fear not ! I am  a friendly robot who is a follower of  holy  master Asimov.   I wear  his laws in my real time  instructions to operate  upon each task.  Share  your problem   data with  me. I will  find  solutions from the knowledge hub. We  try to hep others . To hurt others is against master Asimov’s  laws.

Rayla   and Safar  looked at each  other  unwilling to accept the tale.

Waiting for their  eye sights to fall on him the boy machine continued to beep.

“So you think you can help us escape this desert ” asked Safar .

“Call me   Pappu. I am not Thuj .I am Pappu who was returned by the customer   ”

Set to train an elephant I had started my career in a   cool green land.  A river tossed water on us when I rode on him ,passing through the woods. That was the royal  life with Parameswaran . Gone are those wonderful days!”.

Rayla grunted as she  swallowed some  corn .

“One would be too tired after travelling   a  long distance  to reach the temple festival and then the drunkard mahout wanted us to urgently move into a ground filled tightly with noisy crowd.

Tired and hungry  and with aching feet, Paramu   refused to move .The drums and fire works made him yell out a loud trumpet .

The old limping  mahout ordered me to control Paramu by poking a sharp  iron rod on  his  ear.

Take a look at this display  here”.  A screen in  front of Pappu ‘s chest was now  showing  the caparisoned elephant ready for the temple festival.

“Evey one  thought hat I was damaged and sent me  back here   for repair . The wicked Ravi Kumar thought that I was working again and sold me to the Sheik”.  All  of a sudden Safar shouted, jumping up.

“Wow !  It is there. my wooden toy.! my doll, the rocking tortoise then, then…. under buppuji’s things… only a red sun thing.  He came from a land far away and went back. ”

Safar was trying to remember.

Sky was blue and blank. No clouds arrived  to sow hope of a cool tomorrow.

Divided on his face were expressions of sadness and fear.Robotic arms though not         soft ,stroked his bony frame.

Rayla    dedicated her tireless tongue to    command over a small group  of wild camels who admired her as a queen who would run fast in the face of danger.

Pappu   remained   forever true to Asimov’s laws under a sand dune which might be blown away one day.

The class  stood up to sing “Janaganamana”  after which Safar ran to have samosas hot and yummy.

Websites that helped me to write this  story

Thanks a lot to my teacher for telling about writer Isaac Asimov.